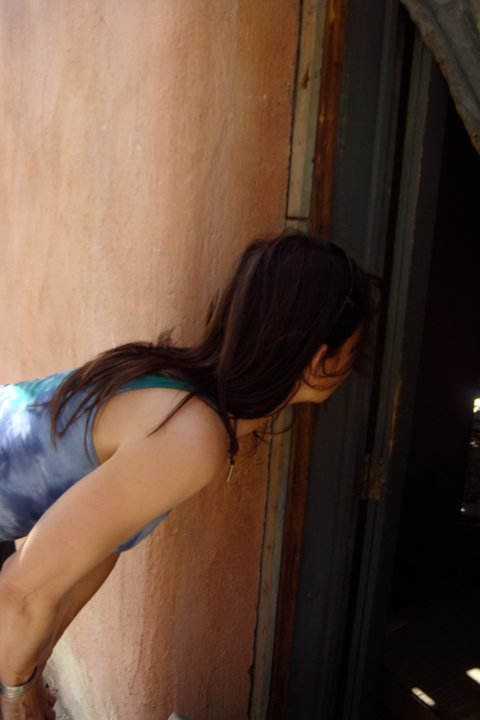 Want to know what it is?  It’s the power of the true feminine.

Sadly, none of us have really been taught how to tap it.  Instead, taping our breasts flat is what we’ve been ultimately taught.

Of course,  it’s not natural, but if you’re in this world as a woman, you’re required to fit the mold and play the game or leave. If it’s not at work, perhaps it’s with the other parents on the playground or peers at the golf course.

Regardless of the situation, why are we as women required to tape our breasts flat and play the game as men?
If we use our amazing and highly tuned emotional guidance system and speak up, we’re labeled hormonal or not a team player: “She’s rocking the boat! Who does she think she is? That’s not how it’s always been done. That isn’t what we expected of you, we expected better. You’re going to have to learn to fit in here.”

Why as women are we required to play by rules that aren’t natural?

I spent 18 years in what I refer to as “Corporate America”. I was successful but miserable. I made tons of money by any standard and wasted it away trying to buy some happiness and peace with vacations, spa services and material things such as clothes, just to ease the empty hole inside my heart. I played the game, cut my hair short, hid my cleavage, monitored my skirt length and kept my mouth shut.

I was as close to a man wearing mascara as I could get. I was one of the boys and I was proud of it. I had something to prove to myself, played hard at their game and won. I won. But instead of their respect, I gained their hatred and lost myself in the process.

It’s not natural. Sure we have to survive in the world and sure there are expectations of us, no question, but why?

Society has always been the strongest motivator to conform. It starts in grade school. Gather two or more together and there will be rules. If we know them, we can save ourselves a lot of trouble down the road, but when do these rules start to inhibit the women that we really are? When do they go too far and actually suppress the feminine in order to control us?

I often wonder in public venues, what would happen if we women suddenly revolted and quit trying to be men in what we’ve perceived as this man’s world?
What if we wore whatever the hell we wanted to, wore our hair as we wished inside the confines of corporate rules, and let our emotions flow freely.

What if we unleashed the power of all the feminine attributes we’ve been forced to stuff behind metaphorical breasts taped flat?

We are feeling miracles. Our emotional tools are highly advanced yet we disconnect the wiring to short circuit ourselves and conform. We have the power to sense the unspoken and feel the emotions of those around us, but we stuff these skills and ignore our own knowing. We try to prove that we’re good enough, pretty enough, strong enough, successful enough and compete like men in an illusionary arena that was not built for us.

What is truly untapped, and the superpower of tomorrow is the power of the true feminine.

When it comes to true feminine power, do any of us really know what it is or how to embody it?

We seethe below the surface because we’ve been oppressed, made wrong, and asked to be less emotional. We’re reminded daily to be less reactive, to stop taking things personally, to let go of fear, buck up, and remember it’s a man’s world.

The contradictory guidelines are overwhelming. We’ve heard people ask in that tone you can feel down into your intestinal track: “Oh, you don’t work? You’re just a mom?”
What really frosted my own ass were the questions from other women who were just as hurtful: “You don’t have kids?” or “You’re married and still working?”

We are all to blame for the repression of the feminine. Men, other women, ourselves, institutions, religions, societal norms- none of us are innocent when it comes to the crimes committed against the true feminine.

The feminine has been and continues to be portrayed as some longhaired crone dancing under the full moon in the smoke of a bonfire as her long skirts twirl around air scented with patchouli.

The face of the true feminine has gone unseen. We don’t yet know what she looks like.

I silently wonder if breast and cervical cancers are ultimately caused by the constant irritation of being forced to shut our true feminine essence down to survive in this world. The world says it wants our radiance, our power, our sexiness, intuition, nurturing, and our compassion. But can it really handle it?

Where’s the honor and acceptance of the feminine in this world? Why do institutions fear it? Why do we fear it?

People: Mud is gonna to slide.

The release of the true feminine takes time. Consider the woman who hasn’t been treated with kindness her whole life, it takes some time to trust again.

If a woman can safely let her built up rage out in the presence of a strong and balanced man or partner, someone who can hear her and not make her wrong, a brilliance will begin to radiate from her skin and eyes that will make you stop in your tracks and bow down.

See a woman who can safely shine her light onto the world, release her passion, the hair she chooses, her feminine cleavage, her emotions, her truth…. and you will see the divine feminine in her human form radiate wonder.

It takes a courageous woman to own her rage. It takes a special woman to walk through this world and let her feminine power shine with abandon. Most of all, it takes a special man or partner to contain himself/herself in her presence and simply witness without trying to control.

How the hell do we do this?

The first step is to get in touch with all of the ways we have silenced that feminine force, then, feel the rage of being silenced to survive and the sadness behind it.

Find a partner or a friend who can hold that space and not take it personally as it’s projected out because someone is finally, finally holding space for your heart.

Find someone who wants all of your gifts, wants the feminine in all of it’s many beautiful, messy and uncomfortable forms. Shout out to your sisters that it’s time to come out of hiding. And if you can’t find a partner who can help you, teach the one you’re with and be patient while he himself wakes up.

Remember this could be painful. Childbirth is messy and dark and we scream in pain as it happens, so remember that this is a process. We are birthing ourselves into a new world.

Quit hating the sisters who shine their light before you yourself have the courage to do so.

Quit trying to hide the rage you feel from years of self-abuse and denying your feminine.

Quit blaming those around you for your own silence. Choose wisely who you will trust your heart to, and remember it takes a strong man to stand in the face of the feminine who has denied herself and been forced to conform in the world.

If you put your finger on a bottle of soda that you shake and shake and shake, you know what will happen when it’s finally released. Don’t pretend to be shocked by your own fury.

Behind that fury is sexual power. Sexual radiance. Sexual freedom.

It’s time we quit killing our feminine, time to look inside our own heart’s window, sit with our rage and look at what we’ve done to ourselves by allowing all these years of repression.

Once we stop the suppression of our own feminine, those around us will cease to as well. They’ll have to.

Until then, we must practice patience and compassion with ourselves as well as those we’ve allowed to reinforce the old paradigm.
Most of all, we must hold our sisters tight, all of those behind us and those in front of us.