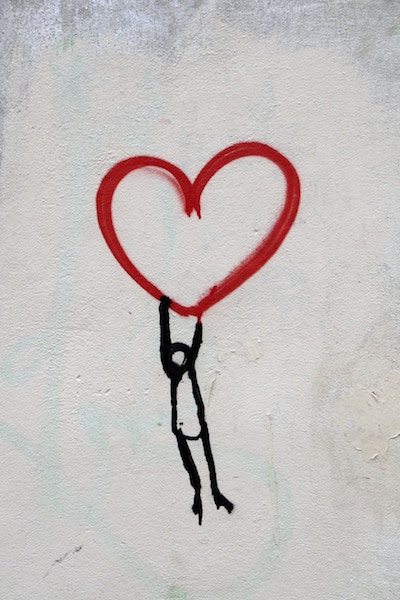 Today, lazy lovers argue that romance is dead, a mere fake ploy to seduce and an act that holds no weight in the world of love.

My head hurts from shaking it no.  Thinking like this is simply a poor excuse to drop the ball.

My earliest memory of romance was my grandfather reaching his farm weathered hand across the table to grab my grandmother’s Irish freckled one in the middle of dinner. Their eyes met in a secret knowing as I watched him rub his thumb across the back of her hand.

While she would roll her eyes and feign complaints about her husband, theirs was a special bond soldered in history and time.  They taught me everything I know of true romance.

To the naysayers I say this:  Romance is only dead if you’re lazy.  It eludes those who spend their evenings trolling facebook for the next prettiest face, sending flirty messages to those who might be and others who have already been, and it escapes those who seek empty promises of easy fantasy versus the fertile potential of reality.

You see romance doesn’t consist of grand gestures, it exists in the smallest of efforts.  Picking a single flower and handing it to the one you love, a short call in the middle of the day, a kiss out of the blue and outside the bedroom, thinking ahead to make a plan, spending time uninterrupted by the world simply connecting, inquiring and listening, and the list goes on.

Now I watch men who would rather have a bike between their legs than make the effort to seduce a woman, women who would rather sit home watching romantic comedies than getting dressed and actually putting themselves out there, and people in relationships emotionally cheating on one another through social media.

While it’s of course healthy for couples to have their own interests and friendships, have these activities become fillers replacing true connection between couples, romance, and intimacy? Has the pursuit of success become so important that it eclipses all need for the slower aspects of life like romantic gestures and romantic interludes?

Romance for my grandparents wasn’t the expensive gestures we see in the movies, it was his cutting roses from the garden and bringing them inside to her, it was her baking his favorite pie, their Saturday night dance dates at the club, and his teasing her until she giggled. Each time he reached across the car seat or the table to grab her hand, I knew I was witnessing true romance.

Romance isn’t dead but we’re trying our best to strangle the life out of it.

If we took the energy we spend swiping left and right and instead remembered the power of sending a song, simply calling to hear a voice, walking under the night sky holding a hand, leaving a note, whispering a wish, or simply giving a flower, the reward of romance would grace our days and ease us into warm embracing nights.

Lazy lovers call romance fake and manipulative, but I say don’t listen to those empty souls.  Those cries of romance not being necessary or being outdated are merely the sad sounds of those who have given up unwilling to make any effort towards love, or to stand in their own vulnerability with their heart in their hands taking a chance on the one thing we say we all want, but so often refuse to seek- real love.

Romance isn’t dead, it’s simply covered up by short term gratification muffled by men who are lazy and women who’ve grown bitter. We’re all so tired of being disappointed, yet somewhere under layers of disposable relationships filled with who’s next versus who matters, there lies the faint beating of the heart of romance.

Here’s where it’s not:

Romance lies in effort.  The effort to reach out, to extend, to make a grand gesture that is actually found in the smallest of acts, and it’s premeditated. Romance requires premeditated effort.  Thinking ahead of another, dreaming and scheming of a future encounter that might actually lead to something. That’s what makes it romantic- it’s an effort by one human being to reach out and affect another.  And there my friend, lies the problem.  It seems none of us are willing to make that effort anymore.

Romance is only as dead as we believe it to be.